We are developing large-capacity heat pipes and vapor chambers for power semiconductors that generate a large amount of heat. The vapor chamber is a flat plate type heat pipe, and since the entire surface has the performance of a heat pipe, high thermal performance can be obtained. We are proceeding with the development of improving the maximum heat transfer and lowering the thermal resistance by improving the internal structure. 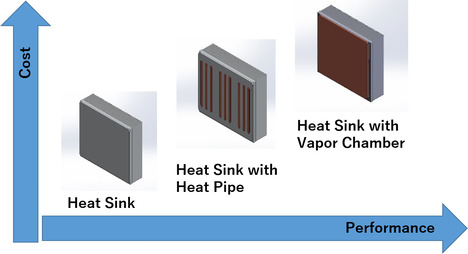 We have developed a liquid cooling unit called a cold plate that uses a microchannel fin structure (Fin thickness 0.15 ~ 0.4 mm) for heat dissipation in high performance computers such as supercomputers and mainframes. Compared to the air-cooled method, the cold plate is space-saving and has several times more cooling performance.