Fujikura outruns counterparts in the U.S. with wires having a length of 100m and leads the world in IcL value, the product of critical current and length.

Just then, when we completed an intermediate layer and then were trying to deposit a film of the superconducting layer on top of it, an important part of the excimer laser that we used broke down. We inquired at the manufacturer's agents and other research organizations regarding parts of the same type, but we did not find a replacement. When all seemed to be over for us, the idea that we could manage to produce 100-m-long superconducting wires with an excimer laser that we used for basic experiments came to us in a flash. We, however, would have to not only move the position of the excimer laser, but also repipe the laser material gas and coolant water if we had followed the method. We had only a few 10-hour periods that we could spend for the construction work, considering the presentation day in the Conference. Fujikura's engineering corps immediately started measuring the site and pipes on the spot and then started the construction work the next morning. We prepared the research paper that would be presented in the Conference, up to the point where we would only have to fill in the characteristic values, obtained the characteristics of the superconducting wires two days before the presentation, and managed to present the paper in the Conference successfully.

In those days, the U.S. had just started a project with an aim to develop 100-m-long superconducting wires four years later, when researchers in the U.S. heard a report from Japan that a company had achieved the target in Japan. It was said that they could not believe what they were hearing. "Unbelievable" was the word used to express the situation. It was easy to imagine that the accomplishment might cause jealousy and resentment among them. 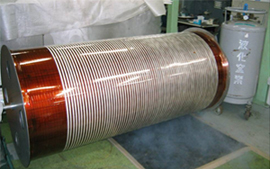