In the days when the IBAD approach was discovered, Fujikura examined the operating principal of the approach with a set of small static equipment. We could only produce intermediate layer wires having a length of a few centimeters with the approach due to the restrictions of the equipment. Following that, we moved on to design and manufacture the first equipment that was capable of depositing a film on a base material tape as we were moving it. To show the world that they could function as superconducting wires, we studied the ion sources in terms of what ion sources should be selected, how they should be placed and the like so that meter-class wires could be produced. When actually manufacturing the equipment, we tried to commission the task to a heavy electric manufacturer good at ion implantation technologies, but the manufacturer at first declined our request because of cost. However, it eventually accepted our request at a considerably low cost based on the assumption that it would be compensated when we succeeded in our project. That was the birth of the equipment at the end of fiscal year 1992. The equipment took so long for orientation processes that wire was produced at a rate of only 10 cm per hour. Due to this fact, it took a few days of 24-hour continuous operation to produce intermediate layer wires having a length of a few meters.

Following that, as a result of further improvements, equipment that was capable of producing intermediate layer wires at a rate of 1 m per hour was developed. We finally succeeded in producing an intermediate layer wire with a length of 100 m. In addition, in an yttrium-based wire development project started in fiscal year 2003, we increased the ion source to 4 times larger than before, from 60 x 8 cm to 110 x 15 cm, so that an intermediate layer wire with a length of 500 m could be produced at a rate of 5 m/h. At the end of fiscal year 2007, we were successful in producing 504-m-long superconducting wires with an average critical current of 440 A with this equipment. 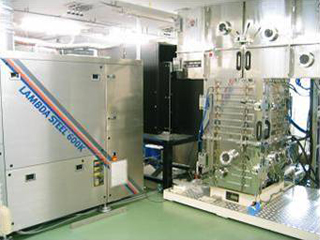