In 1990, the new Building was completed in Fukagawa, Tokyo, and integrated the Head Office. The sale, engineering and head office functions were gathered in this building so that they can be united in business operations. 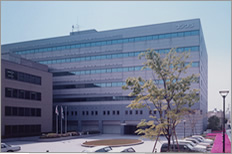 The corporate name was changed from Fujikura Electric Wire Ltd. to Fujikura Ltd. on October 1st, 1992. Our business had long been concentrated on electric wires, but by that time we had also advanced in new fields including electronic materials and optical systems, breaking away from the position of an electric wire specialist. It was on this background that we attempted a new departure of Fujikura, expressing our will of making positive efforts in advancement in new business fields and appealing new corporate image free from the electric wires at the same time as continually enhancing the electric wire business.

The Futtsu Plant was built in October 1992 as a new base for manufacturing and development of power cables to replace the Fukagawa Plant, and started operation on the same day as the corporate name change. Under the trend of increase in voltage, capacity and length of power cables, the Futtsu Plant is the most advanced plant that can deal fully with user needs as the site of production of the high-voltage CV (Cross-inked polyethylene (XLPE) insulated PVC sheath) cables, OF (Oil-Filled) cables and submarine cables.

Redevelopment of the site of Fukagawa Plant

The site of the previous Fukagawa Plant was redeveloped as a new urban area "Fukagawa Gatharia" in 2000. We attempted to develop an active quarter in the historical place of Fukagawa and created a complex with three functions of "business," "shopping" and "amenity."

Fujikura Becoming the Top Brand in the World