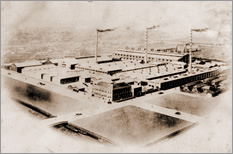 On September 1, 1923, the Kanto Earthquake struck the Fukagawa Plant that had just been completed earlier in the same year. The damage due to the earthquake itself was relatively light and broke only one chimney, but the plant was totally burnt down by a fire that was produced in the Suzaki Benten-cho on the evening of the earthquake.

The response of President Tomekichi Matsumoto was very quick. He used the facilities at the non-damaged Sendagaya Plant and started rerunning three machines on the next day. The electric wires in the inventory sold like hotcakes, providing the funds for the restoration.

When President Tomekichi Matsumoto passed away in March 1938, his eldest son Arata succeeded him and became the second president. The new president founded new companies including Fujikura Chemical Industries (presently Fujikura Kasei Co., Ltd.) and Fujikura Aircraft Industry (presently Fujikura Parachute Co., Ltd.) immediately after taking over the post, and also improved many points in the welfare of employees. He did not spare understanding and assistance for the cultural and sport activities of employees. He particularly loved baseball and brought a breakthrough to the Baseball Club he created himself, leading to successive victories in the 12th (1938) and 13th (1939) National Inter-City Baseball Tournaments. But those days were also the period in which the upcoming of war was felt deeply in Japan.

On March 10, 1945, when the war seemed to turn against Japan, the Tokyo Air Raid attacked the Fukagawa Plant, destroying it completely and killing a large number of victims. However, after the war, President Arata Matsumoto restarted production as early as in September in spite of extreme insufficiencies of copper and other materials, and took the initiative in the post-war restoration.

Foundation of the Baseball Club
(1923)

The club was founded in 1923 by second President Arata Matsumoto, who was then the head of the General Affairs Department. However, the new uniforms were burnt in the Kanto Earthquake immediately after they are tailored. In 1925, a baseball ground was created on the side of the plant. Practices were started after work at 16:00 HRS., and the games were held only on holidays.