Fukagawa Plant under restoration:
Reconstruction and restart
of production were as early
as in Sep. 1945.

The Fuji Plant was opened as the evacuated plant under war in 1944. It accommodated the machinery that was left unburned after the Fukagawa Plant was destroyed by the Tokyo Air Raid, and operated as the rubber-insulated wire factory. Nevertheless, because the plant had originally been built as a paper mill, it had problems in both the layout and efficiency for use as an electric wire plant. So we decided to find a new plant location in the city of Numazu, and started operation of the Numazu Plant in July 1953. The initial products of the plant were copper conductors, aluminum wires, rubber insulated wires and plastic wires, but the plant also became the birthplaces of many technologies and products that supported our business foundations.

It was in the middle of the "Iwato" economy boom of 1960 that the idea of building the third plant after the Fukagawa and Numazu Plants was born, To deal with increases in the product species and orders for them, it was urgent to constructing a modern plant that can deal with the increases. The Sakura Plant started pilot operation in 1964 and full operation in 1965, and grew rapidly as a modern plant of telecommunication cables under the high economic growth period of Japan. Even after that period, the Sakura Plant continued a high-rate growth and became the firm to support foundation of our business covering mass-production of optical fibers, mass-productions of FPC (Flexible Printed Circuit) boards and electronic wires, and development/manufacturing of optical fiber fusion splicers. 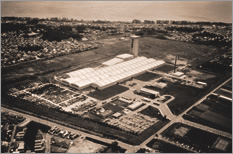 The rapid increase in the demand for electric power in the period of the Izanagi economy boom since 1965 has led us to plan construction of a plant specializing in manufacturing of power CV (Cross-linked polyethylene (XLPE) insulated PVC sheath) cables. As there is an ardent offer from Suzuka-shi, Mie, to invite a plant there at the same timing, we constructed the Suzuka Plant as our fourth plant in 1970. With the equipment at the highest level at that time introduced, it was built as an advanced CV cable plant. The Suzuka Plant received large-scale orders from the beginning and continued full-rotation operations. It achieved a rapid growth as one of the most important foundation of our electricity business.

The Kasumigaseki Building was completed as Japan's first superhigh-rise building (36 floors over the ground, 3 floors underground) in April 1968. We decided to move the headquarters functions to this building and started operations at the 11th floor.